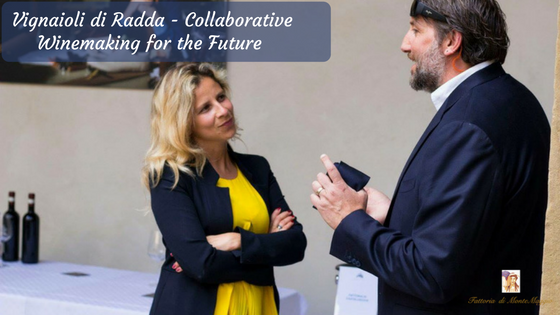 The Ferragosto weekend has passed, it is still holiday time here in Italy but people are slowly getting back to work and the daily whereabouts. As a bit of a throwback, we wanted to rewind back to the beginning of the summer and the event “Vignaioli di Radda” (Winemakers of Radda).

This event took place on May 26, a sunny Friday, in the House of Chianti Classico in Radda. It was organized by the association of the winemakers themselves and was a sort of pilot event. The aim was to set the tone for a yearly event in order to valorize the territory of Radda and its viticultural heritage.

Fattoria di Montemaggio was, of course, present as one of the so-called founding members of this association and event.

This first event of the Vignaoili di Radda was introduced by Roberto Bianchi from Val delle Corti winery, who has been one of the main initiators to this association. Also, Pier Paolo Mugnaini, the mayor of Radda, and Giuseppe Liberatore, the director of Consorzio Chianti Classico, presented and helped to launch the association and this day in Radda. The introduction was followed by a short presentation on the history of the Radda territory and the typical traits of viticulture and winemaking in the area by agronomist Andrea Frassineti.

The Consorzio Chianti Classico is and has been, supporting the founding of the Vignaioli di Radda and it was, of course, symbolic that the event took place at the House of Chianti Classico in the center of Radda.

After the more theoretical part of the event, the wine tasting started with a specific focus on a horizontal tasting of the 2013 vintage. For the rest, you could taste various vintages from the different tasting booths where the producers were present themselves. Fattoria di Montemaggio, with Ilaria and Denis present, had brought the Chianti Classico Annata 2013 and Chianti Classico Riserva 2011.

The new Association of Winemakers in Radda

The Chianti Classico brand is gaining more and more visibility also on the international scene, so it is a good moment to form a winemakers’ association. In this way, the winemakers in Radda can gain their own momentum as a sub-entity within the consortium.

Radda is a territory that dates back more than 4000 years and it has always served as a rural center. Today, Radda is still a territory with a focus on agriculture and above all on viticulture. In total, about 700 ha (1700 acres) of the land in the Radda district consists of vineyards.

There are about 30 wineries in Radda of which 27 are part of this new winemakers’ association. On the event day, 26 of these wineries were taking part in the general wine tasting with their wines. Furthermore, 21 of the wineries mentioned above are organic in their farming approach.

Radda used to be a district where it was very difficult to make Chianti Classico wine. The altitude, which before was perhaps not in favor of the wine production, is today one of the key denominators for high-quality Chianti Classico from Radda. The climate changes have brought about higher temperatures and a better exposition to sun and heat. The result is the ability to produce very fresh and mineral wines where the elegance is predominant.

Where do we go from here

The Vignaioli di Radda has come together with their passion and dedication for the Radda territory in order to collaborate and stand united. As mentioned above, the area has historically been a tough and at the same time delicate area but the climate changes have favored the viticulture and the production of fresh and elegant wines. In order to have a vision together, wineries in the Radda district ranging from small ones of only a few hectares of land up to the larger scale wineries have here given birth to a unique project.

This is the start of a, hopefully, fruitful collaboration and development among the winemakers in Radda. The yearly event such as the one we attended here on May 26th, can become a good occasion to showcase the work in the future to the external world and gain better visibility.