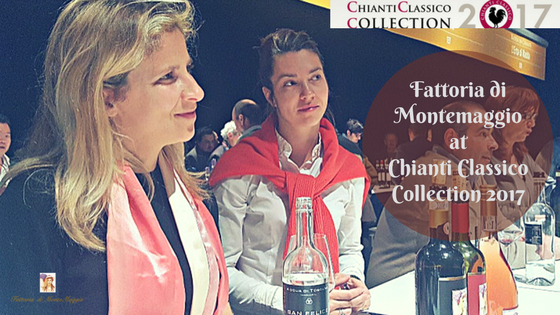 Last week, the yearly Chianti Classico Collection event, the so-called Anteprima of the vintages that are launched during the current year, took place. This event is organized at Stazione Leopolda, which is an exhibition space for events and trade shows in the heart of Florence. During two days, you can taste the new vintages of the Annata, Riserva, and, lately, also Gran Selezione from the different Chianti Classico producers. They also often bring new vintages of other wines they are producing.

The Anteprime Toscane, i.e. the sneak peeks of wines from the different wine consortiums in Tuscany are events that draws a lot of attention from national and international media. Let us take a closer look at Fattoria di Montemaggio’s participation at this event, with the hashtag #ccc17.

The tasting has been going on all day long at #ccc17 today. The #wines were received well, the people were happy to learn more about #Montemaggio while swirling their glasses. The theme words Cuore, Cultura, and Carattere were indeed expressed to their fullest today. A lot of passion, history, territory, and terroir at the Anteprima today! … #chianticlassico #sangiovese

In 2016, the Consortium of Chianti Classico celebrated their 300 years of history with a lot of pomp and circumstance. A long series of events were organized during last year in order to underline the historical importance of the Chianti Classico district. Indeed, it all started with the announcement of Grand Duke Cosimo III of Medici in 1716 to delineate the best wine production area in Tuscany.

Read more about this in the articles: Gran Selezione – A New Era of Chianti Classico Wines and A Classic Aperitivo with Fattoria di Montemaggio.

The pomp and circumstance did not end with the 300th anniversary, though. The Consortium of Chianti Classico had ideated three strong themes for the 2017 edition of the event. Three themes that in an integral way characterizes the essence of the Chianti Classico area and its wines, namely Cuore, Carattere e Cultura, i.e. Heart, Character, and Culture.

In this manner, it was possible to embrace the passion of vine growing and winemaking, the character, and essence of the territory and its wines, as well as the centennial culture and history behind the Chianti Classico wine production. Centennial, or even millennial, because winemaking can be traced back at least to the Etruscan era in Tuscany.

These three themes can be used to describe what lies at the heart of the wine making at Fattoria di Montemaggio too. We can use it as a sort of case study to show you how Cuore, Carattere e Cultura runs like the main theme on all levels within the Chianti Classico area. 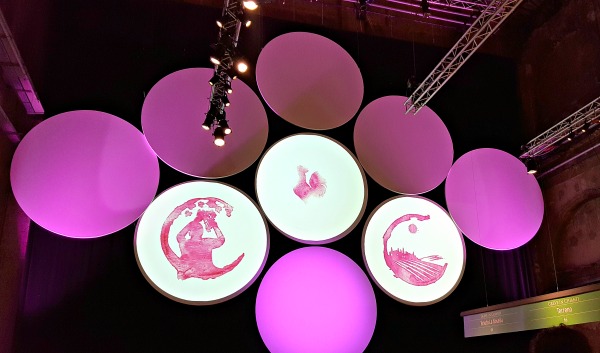 Carattere – the Character lies in the specific terroir and how it influences the wines produced at Fattoria di Montemaggio. The soil gives a lot of minerality, body, a strong backbone, yet, without ever lacking in finesse. It is what makes the wines elegant and smooth.

As you can see, the character is important and what defines the Chianti Classico wines at Fattoria di Montemaggio.

Cultura – the last of the three C’s is here referring to the Culture. The Culture can be said to go back to the Etruscans as they are indeed the historical memory in Tuscany when it comes to vine growing and winemaking. The culture of the land and the Tuscan traditions are thus very important. The artisans who since generations back inhabit the area and bring forth an artisanal tradition is another essential part of the historical legacy in Radda and in Tuscany.

A #tb to Monday and the Chianti Classico Collection #ccc17. The event saw a steady stream of people passing by to taste the three wines we presented: #Rosé 2015, #ChiantiClassico Annata 2013, and Gran Selezione 2010. … Some were very concentrated while tasting, some were chatting freely in a group enjoying the tasting together…and our Valeria and Ilaria explained the traits of the #wines with pleasure. … What was your take on the Chianti Classico Collection 2017? … #FattoriadiMontemaggio

The Chianti Classico Collection is, as you have noticed, an important trade show for the wine producers within the Consortium of Chianti Classico. Not only for presenting their wines, but also to get visibility to their individual brands as well as to the consortium as a whole. The wines launched by Fattoria di Montemaggio this year are interesting and full of distinct flavors reflecting the terroir and giving them their special Radda character.

Read more about the wines from Fattoria di Montemaggio here.